This post will discuss bringing incognito-like functionality to PowerShell in the form of a new PowerShell script (Invoke-TokenManipulation), with some important differences. I’ll split this post up in to three sections:

Even if you think you know how tokens work, I’d recommend reading the token overview because it highlights differences between this script and incognito.

Why bother with this script? As many of you may know, Windows 8.1 introduces changes that make pass-the-hash style attacks more difficult. As part of this effort, LSASS can be turned in to a protected process (which should make dumping credentials harder). One way to get around this protection is to load a kernel driver and disable the protected process flag (Mimikatz 2.0 already has this built in). Unfortunately, installing a kernel driver might be noticed.

Another solution to the pivoting problem is to simply ignore credentials and instead impersonate the security tokens of logged on users you’d like to pivot with.

I’ll start this off by stating that you should read the Windows Internals books if you want a more complete overview of how stuff in Windows works. This will be a brief description to give users helpful background knowledge.

So what is a security token? In a nutshell, a security token is something that identifies a user. Whenever you create a process, it has a token associated with it so the system knows things like:

When a user logs in to Windows in a domain environment, they can visit authenticated network resources without re-entering their credentials thanks to Single Sign-On. Windows caches the credentials of the user so the user doesn’t need to be prompted for a password every time they access a network resource. The credentials are cached in the LSASS process, and Windows determines which credentials to use with SSO based on the security token of the process/thread.

If you’ve ever impersonated a “delegation” token and then failed to make a network connection using the token, this is the culprit. A lot of clients will authenticate with full delegation privileges, but only do a network logon. Even though the token could be used to authenticate to resources off box, it has no credentials to do so.

When running as an administrator (which my script requires), you can turn a token, including an impersonation token, in to a primary token. So don’t worry about impersonation vs. delegation tokens, just make sure the token you choose wasn’t created by a Network Logon (type 3).

What does it do?

Invoke-TokenManipulation allows you to enumerate all available security tokens on a system. You can create new processes with these tokens (run processes as another user without needing their password) or you can make the current PowerShell thread impersonate one of the tokens (which has issues, see below).

All right, so how does this script actually work?

First, you must enumerate the tokens on the system:

Now the script has a list of the tokens available on the system. It’s worth noting that protected processes cannot be opened with the permissions required to capture their token.

To impersonate a users token:

To create a process using a users token:

I ended up running in to a few issues when writing this script.

The first impersonation feature I implemented was the ability to impersonate a user with the current PowerShell thread. Unfortunately, I wasn’t able to authenticate off box using PowerShell remoting after impersonating the user (it would authenticate using the token of the process, not the thread). I haven’t done any disassembly, but I suspect that PowerShell is multithreaded; when you attempt to do PowerShell remoting, PowerShell likely spins up a new thread that inherits the token of the process, not the current threads token. This means the best way to use the script is to create new processes with alternate tokens. 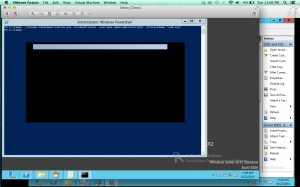 The GUI of applications only partially renders due to the file permission of the Window Station and Desktop objects.

In Windows, many default ACL’s give “NT AUTHORITY\SYSTEM” full permission and other users partial permission. Given that everything worked as SYSTEM, but the GUI only partially rendered when run as another user, I figured there was a permission issue with the Windows Station and Windows Desktop objects. Sure enough, adding an ACL to grant the “Everyone” group full control of my Window Station and Desktop (“winsta0\default”) did the trick. You can now create a process as any user and have a fully functional GUI.

Processes can now be launched with a full GUI.

Here’s an example of using the script to attack a user on a system running Windows 8.1 with LSASS set to be a protected process. You could install a kernel driver to turn off the protected process, or you could be a little sneakier and use this script:

First, create a new PowerShell process running as “demo\administrator”, a domain admin who is logged on to the Windows 8.1 system:

Since Invoke-Mimikatz is run from the PowerShell window created using “demo\administrators” token, it will authenticate over the network as the domain administrator.

Last but not least, I’d like to thank Matt Graeber for the debugging help and taking the time to review the script.

3 comments on “PowerShell and Token Impersonation”